Fiction writing is fun. It’s your world, and you can do what you want with it. If you’re laughing while you write, and looking forward to writing what comes next, I figure you’re probably writing something that someone else will want to read.

My first young adult novel, Flow, was first written a few years ago as a present for my then-11-year-old daughter. It’s been revised and (hopefully) improved a few times since then. In 2012 I decided to self-publish it. I think it’s pretty good, fast-paced, and funny. I admit it’s my first book, and I think I learned a lot writing it. I hope you’ll give it a try. Be forewarned: I don’t like to dumb things down for kids. I use some big words, and I don’t stop to explain things often. Eventually, it all makes sense. Just hang in there and enjoy the ride.

My original intention was to post chapters here for free, but now that I’m working with Amazon on distribution thru Kindle, in print, and through their Amazon Prime Lending Library, I’m not allowed to do that. If you’d like to see a sample, a few chapters can be previewed through Amazon’s site. Please take a look!

I wrote a second novel, Four, a few years later– actually as a NaNoRiMo challenge! It’s a kinda-sorta-maybe prequel, except I didn’t use any of the same characters, and I didn’t use the same setting at all. Come to think of it, it’s really barely a sequel. But someone wanted to know where the Flow came from, so I came up with a new story that kind of gets around to that eventually. Honestly, the two books don’t have much in common and don’t need to be read in order. Even more honestly, they don’t have to be read at all– but too much honesty can be a bad thing. So why don’t you mosey over to Amazon and see what Four is all about?

My next novel has been rattling around in my head for quite a while. I feel, someday, I need to connect Four to Flow, and answer the question “What happened to all the trees?” I promise, if even a small handful of people enjoy Flow and Four, I’ll plan to get around to writing whatever-comes-between-them soon. Ish. And I’m open to title suggestions, since I’m obviously lacking in the creative-title department.

The author and his assistant. I’m the one without the tongue hanging out. 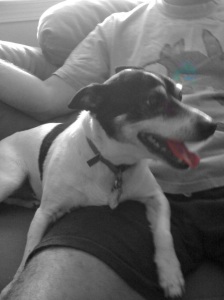